When designing a custom home, homeowners should pay attention to how the room will function and feel when they walk into it. Specialty ceilings can dramatically transform the look and apparent space of a room. When the the space from the floor to the ceiling is increased without moving walls, it will give the impression of the room being much larger. Incorporating details to the ceiling will also add character to an otherwise blank canvas. Here are some of our homeowners' favorite options.

A tray ceiling can give the visual effect of a ceiling that's higher than it is at the plate of the room. Tray ceilings are also called recessed or pop-up ceilings. They are so named because they have the appearance of an inverted tray, with a center section that is recessed and sometimes surrounded by a line of molded trim. The corners of a tray ceiling usually form a 90° angle, or they may form a decorative scrolling. Double tray (or more step-up) ceilings have two or more recessed trays within itself, creating more visual dimension. 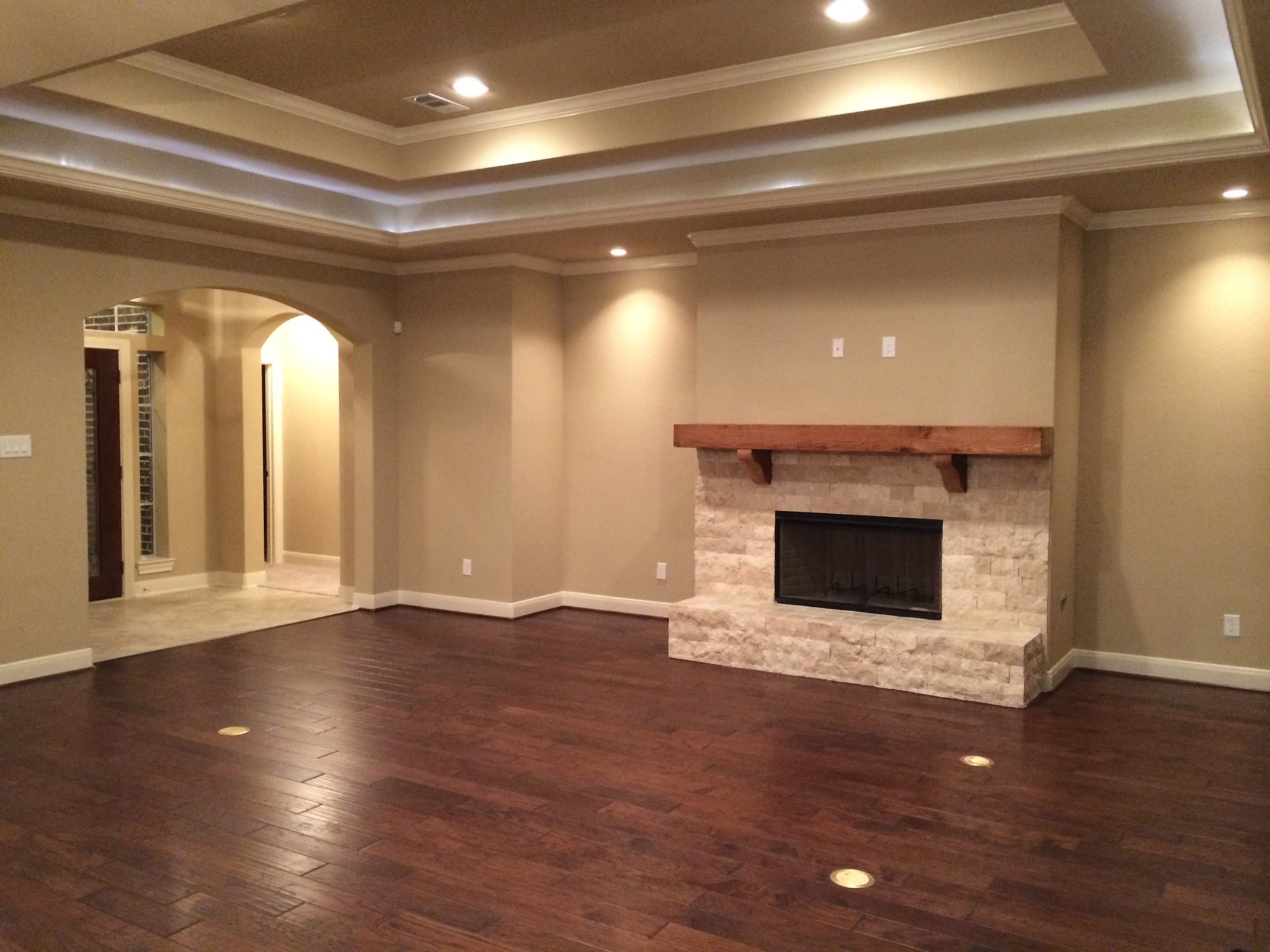 A groin vault ceiling is a stunning architectural ceiling that was often used in Roman construction. It’s created with two barrel vaults that intersect at right angles. The resulting arches can be round or pointed, depending on preference. Groin vault ceilings can span a large room or a narrow hallway, and they add an intricate design element to any room - especially when large or small chandeliers are hung from the dropped central point of the vault. 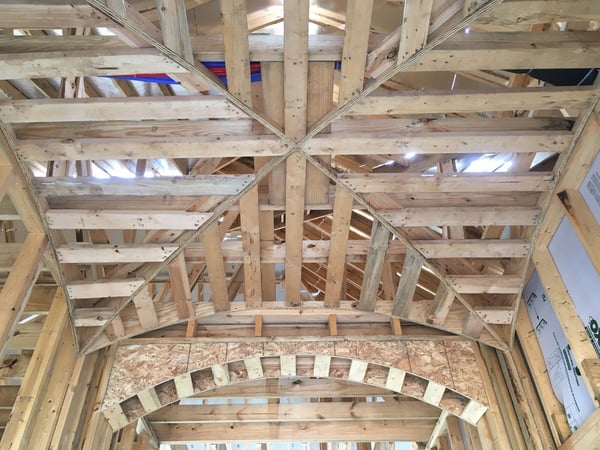 Here is an impressive picture of a groin vault at the framing stage, a very intricate process that results in a beautiful architectural element. See the end result of a groin vault below - complete with a pendant hanging from the lowest point. 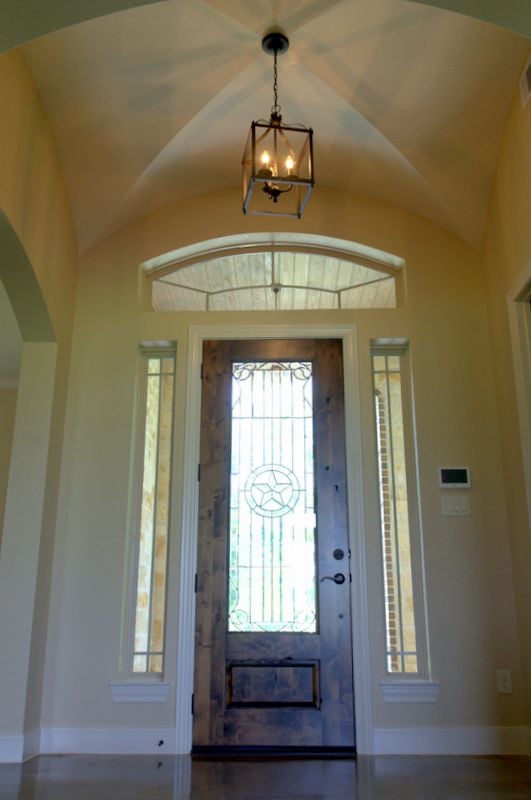 Another way to increase the illusion of added space to a room is with a cathedral ceiling or a flat-top vault ceiling. The cathedral ceiling consists of long, sloping sides, equal in length, that align with the pitch of the roof. A prominent ridge is usually visible down the center of the two sides. 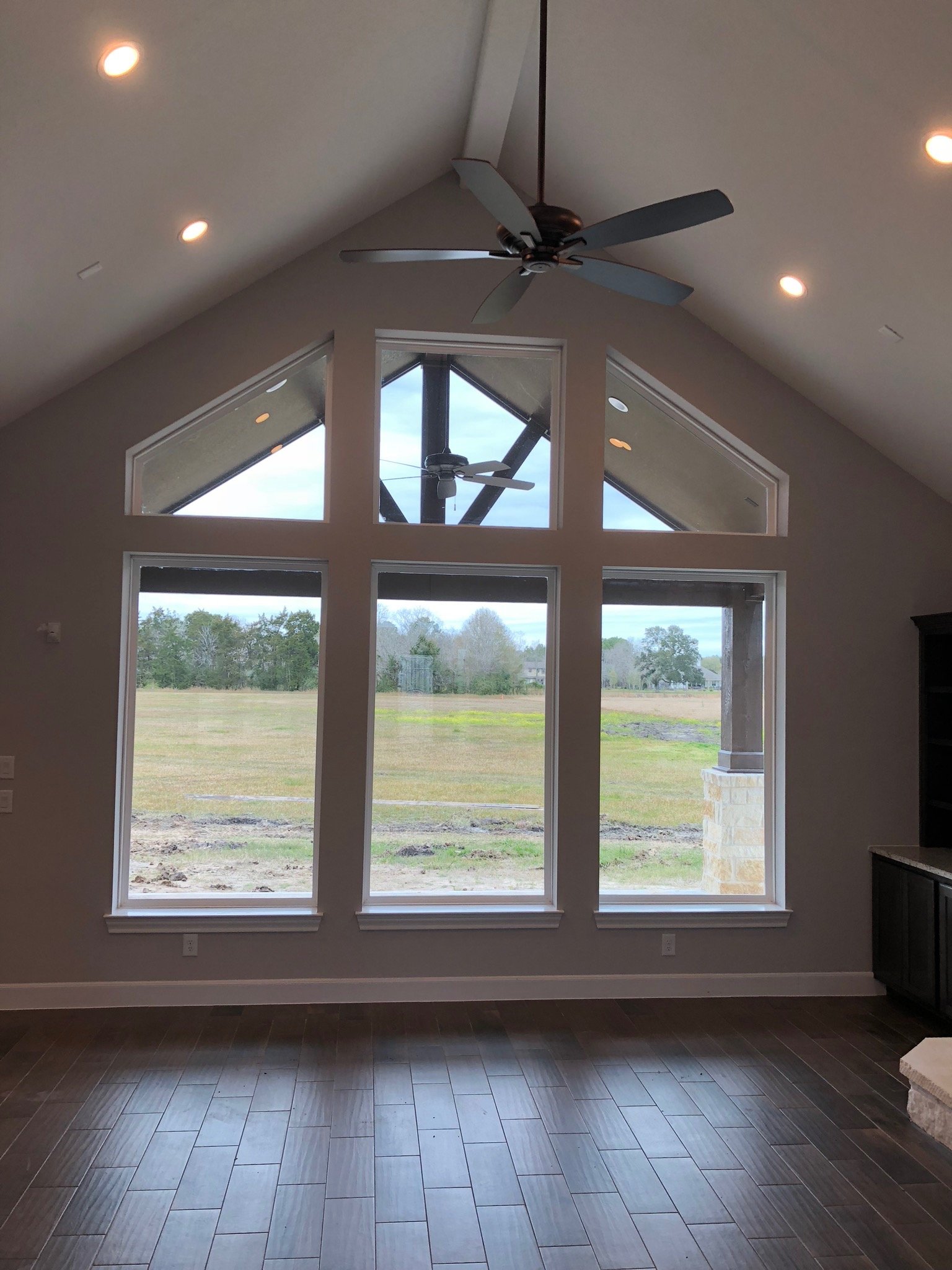 Below, the flat-top vaulted ceiling has a wide, flat span in the center of the two equal sloping sides, instead of just a single narrow ridge.

A barrel vault ceiling resembles a wide tunnel and is sometimes referred to as a wagon vault. It’s formed by a succession of single curves that extend down a hallway or a long great room. Barrel vaults can also be constructed so that two or more are lined up next to one another. For an added texture and color, barrel ceilings can include inlaid accent tile, brick and stone veneer, as well as reflective/mirrored backsplash. In the wine room shown below, the brick application adds an old-world flare to the space. 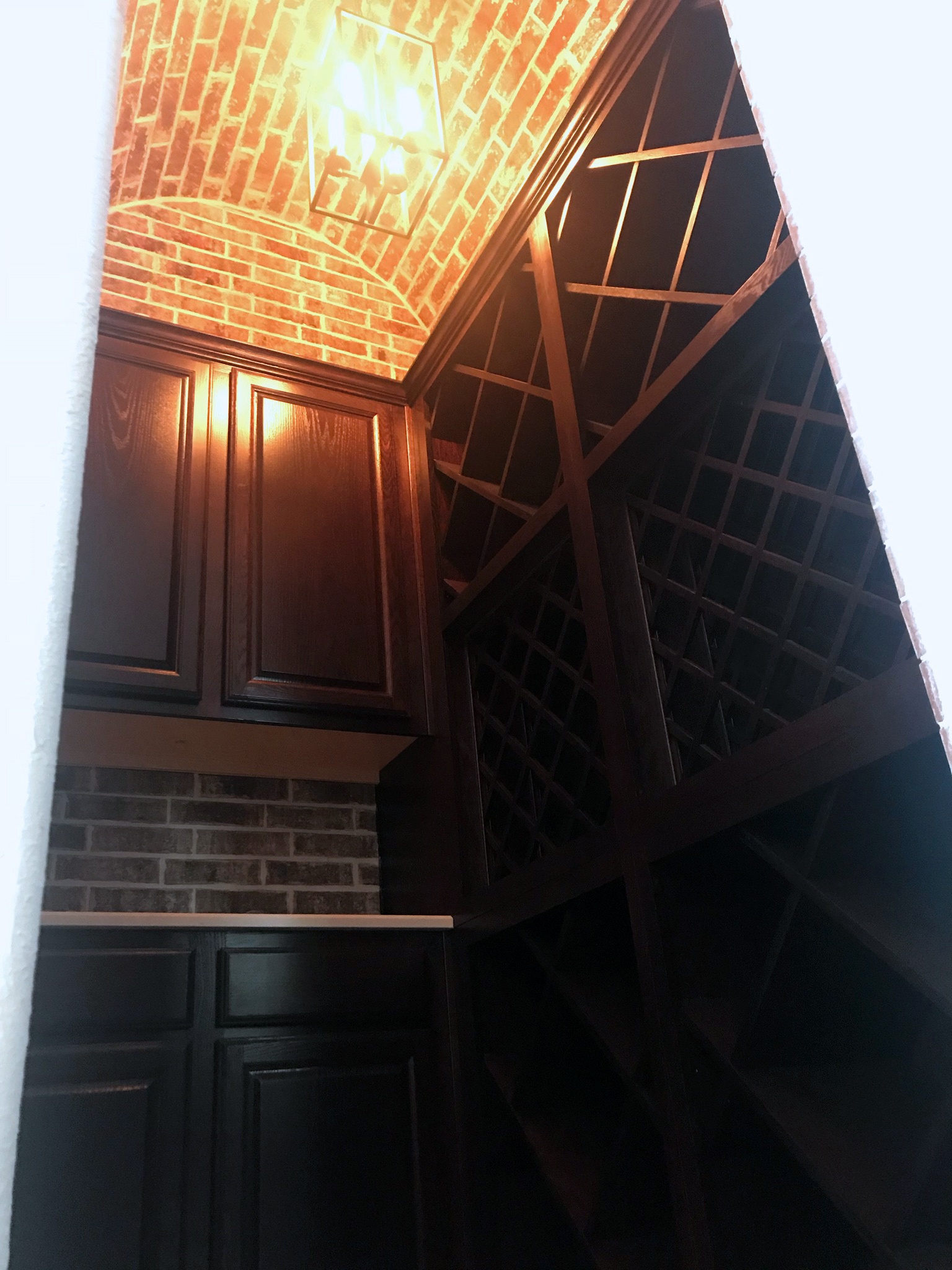 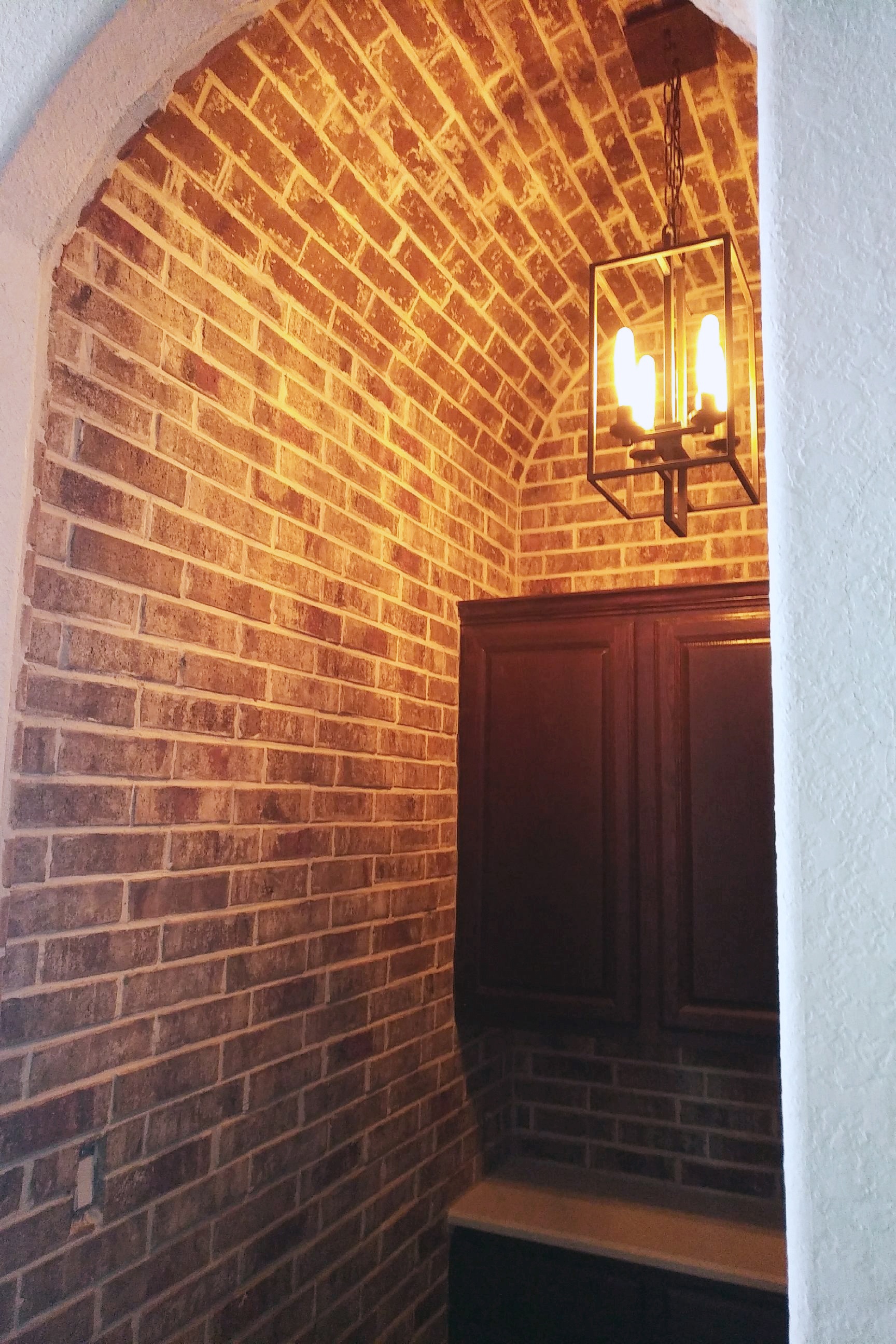 For walk-thru showers, such as the below image, a barrel ceiling entry adds character with the 1" x 1" tile accents into the space. 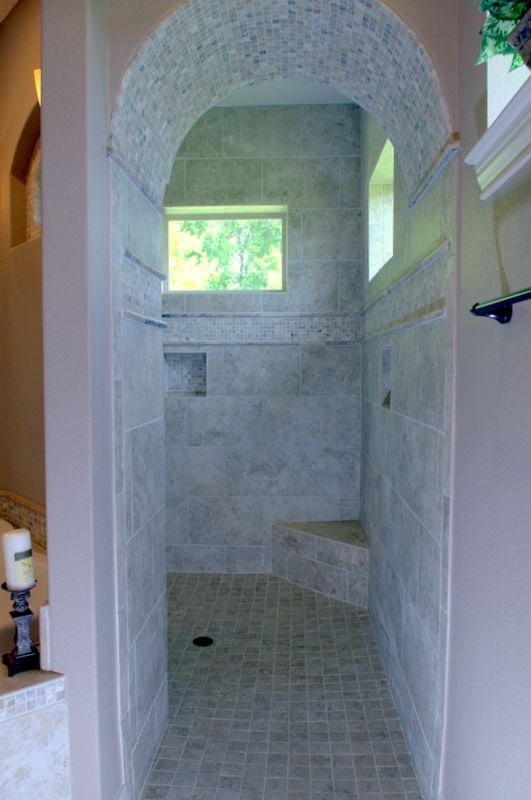 A shiplap or a tongue-and-groove ceiling application give a classic architectural look that is particularly appealing on outdoor ceilings, though either can be used anywhere in the home for a pop of detail. Shiplap is made of interlocking pieces; each board is formed with a rabbet joint on the top and bottom to fit perfectly. Tongue-and-groove boards are milled so each end interlocks into the end of the next board. Depending on the look preferred by the homeowner, shiplap and tongue-and-groove can either be stained or painted. 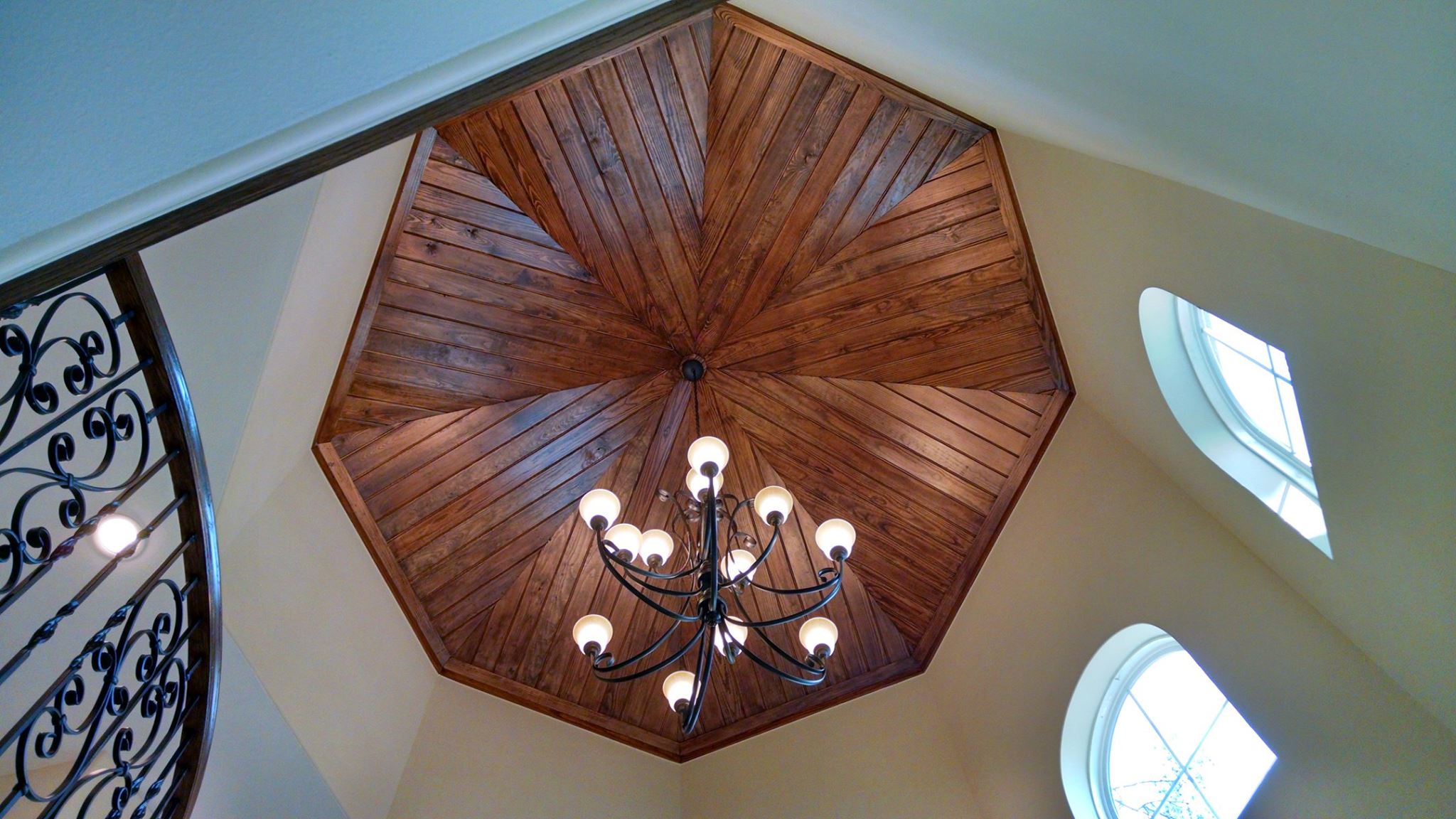 The arched king truss - as shown in the time-lapse sequence above as well as the exterior version below - is a timber-frame truss that is often used to highlight a vaulted ceiling, either for the interior of the home or the exterior. The apex of the truss reaches to the center of the ceiling and the timber arches reach across the span. 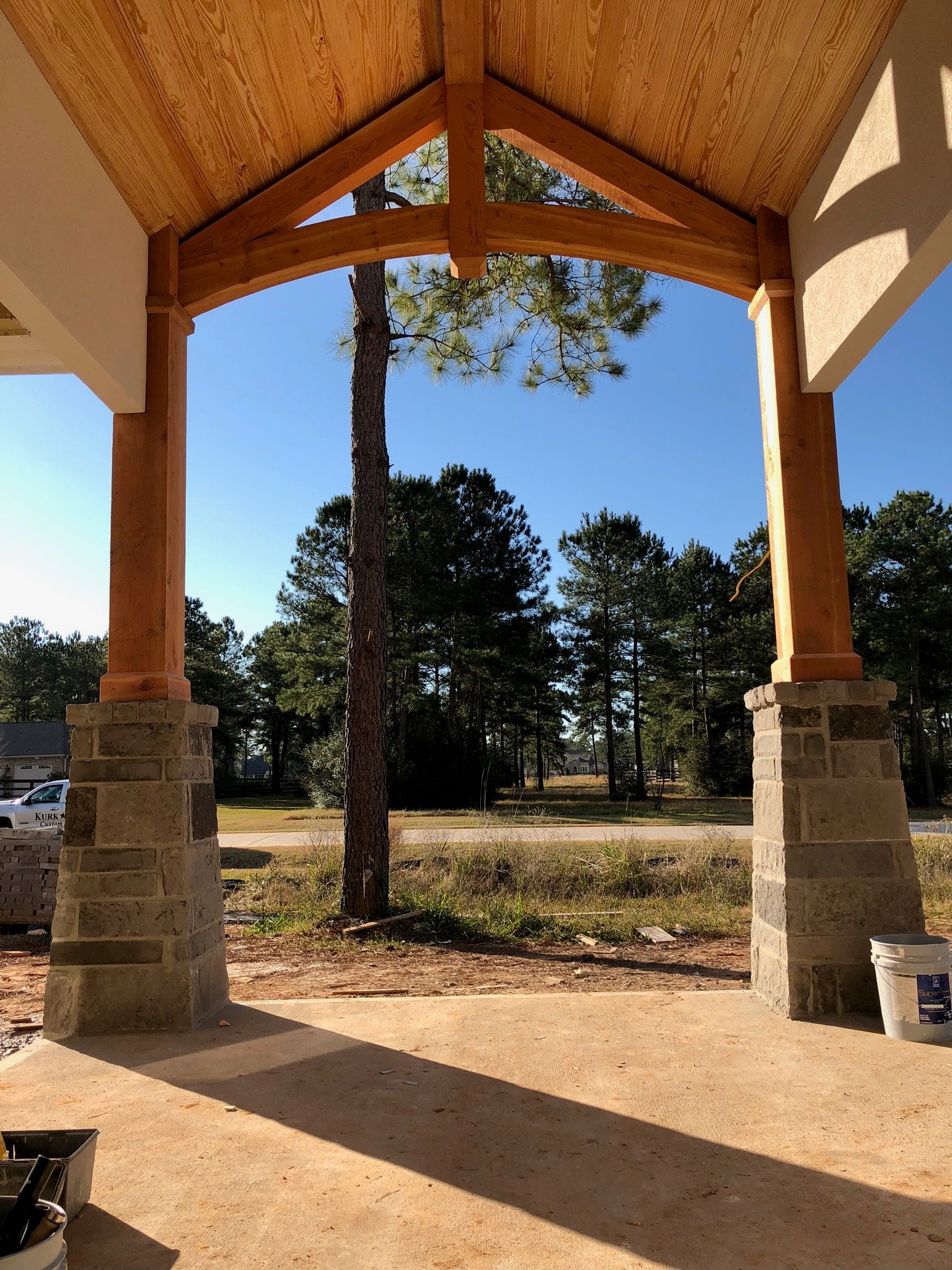 Decorative (or wrapped) trusses are also an attractive way of adding interest to an open gable on the front side of a vaulted ceiling. There are a few styles and materials (typically cedar, pine, or Hardie) for wrapped truss design, dependent on homeowner preference. 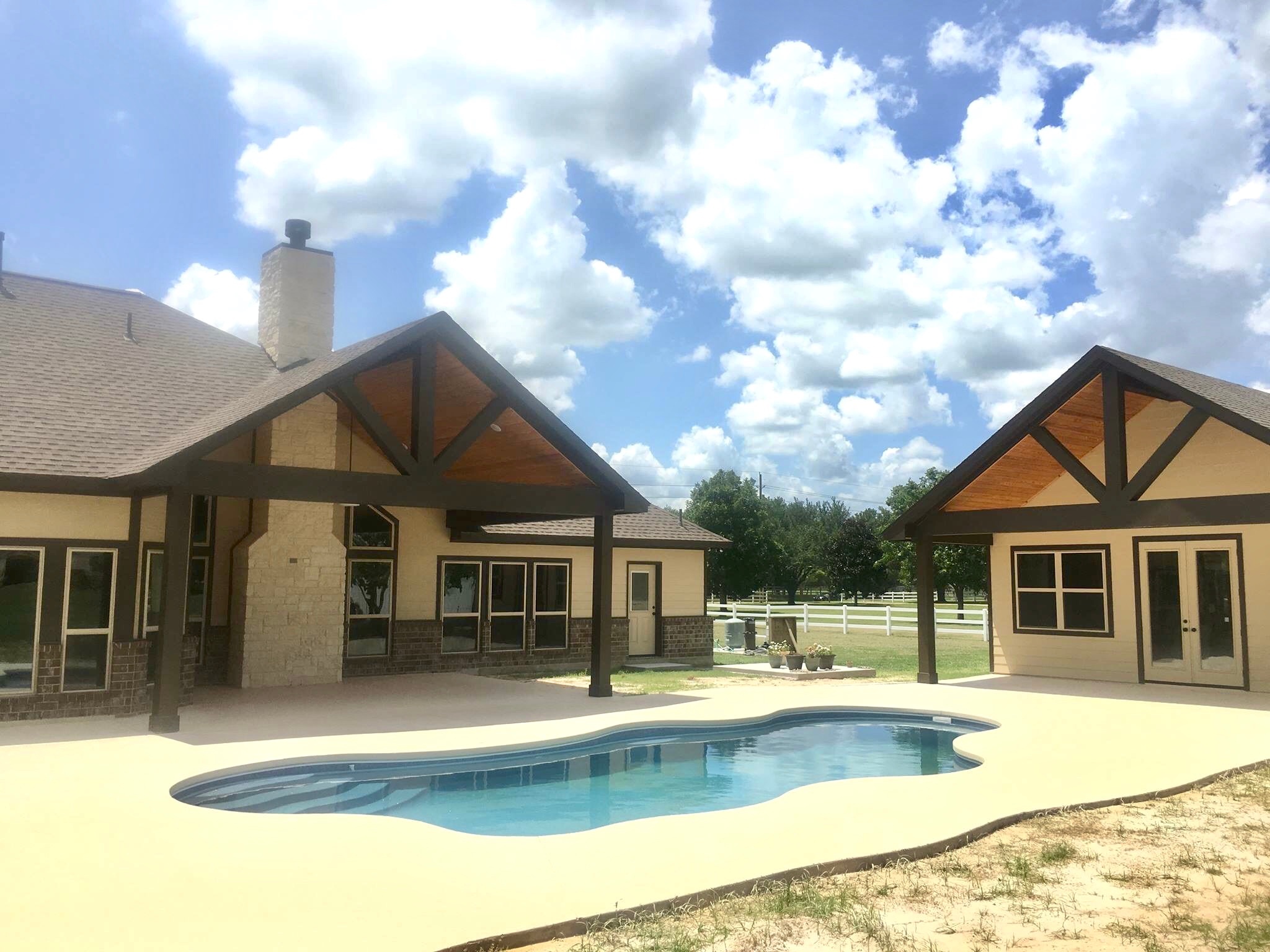 Wrapping ridge beams elevates the appearance and increases the dimension of solid pine timber beams. Beam wraps cover the beam on three sides, and they're available in several selections of wood species. Adding the illusion of multiple beams in a space is also a common design element in taller ceilings, again the homeowner can select their preferred wood species and number of faux beams.

Waffle or coffered ceilings are made with a series of sunken panels that are higher than the rest of the ceiling. Often the sunken panels are lined with a graded “steps” to add even more interest, much like an ornate picture frame. The waffle or coffered effect is created by attaching the panels to a dropped grid. The result is a stunning architectural look that instantly upgrades the look of the room. Many homeowners create the effect of a coffered ceiling by criss-crossing faux beams in a tic-tac-toe pattern on the ceiling. The beams give the impression of the dropped grid without structurally changing the ceiling. 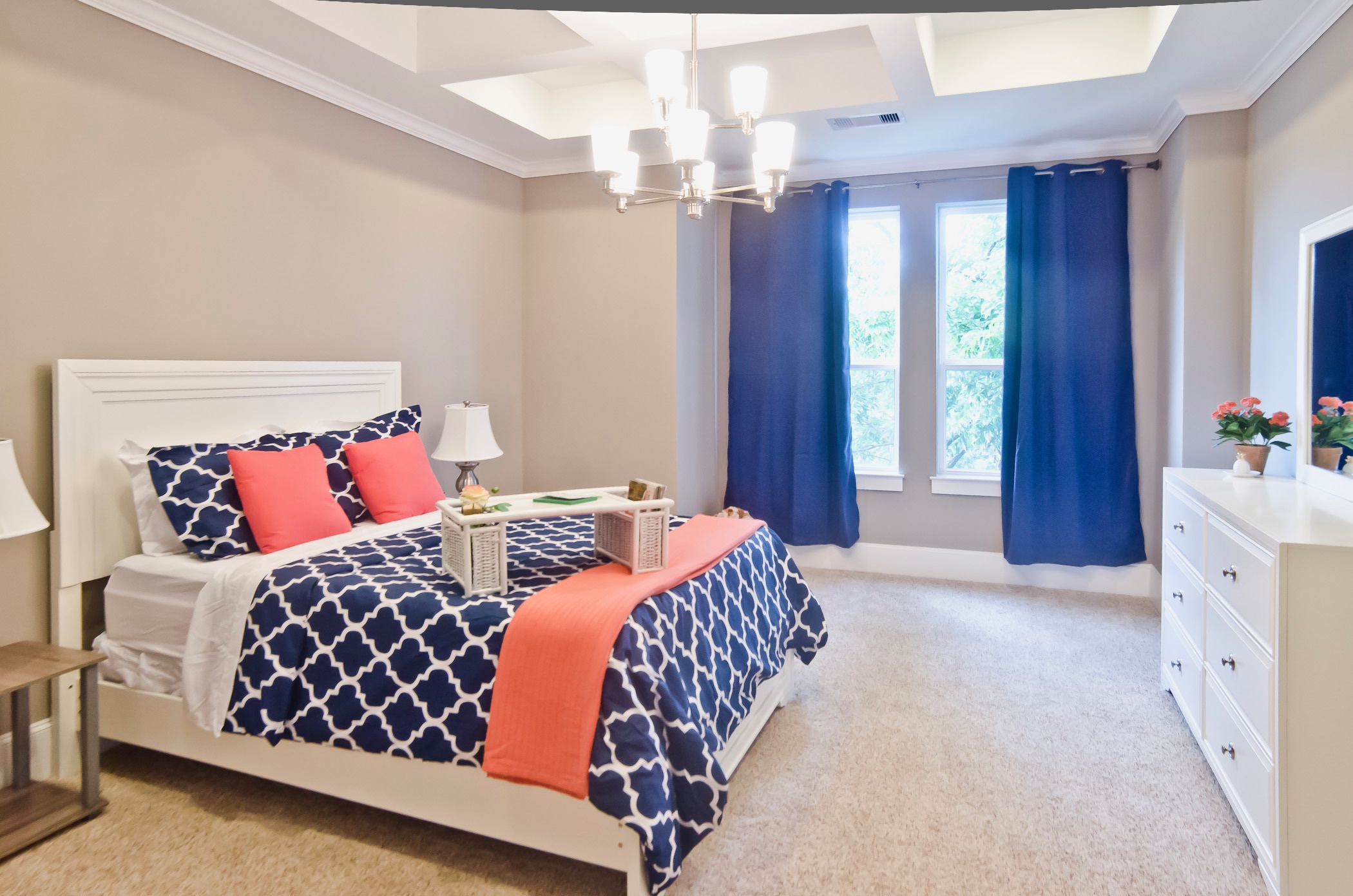 A clerestory ceiling is a very high, sometimes two-stories or more, ceiling trajectory that includes a series of windows above the rest of the ceiling line of a room. This ceiling detail greatly increases the amount of natural light and introduces outside vistas into the home. It also adds interest to the elevations of the home with the added window and roofing detail. 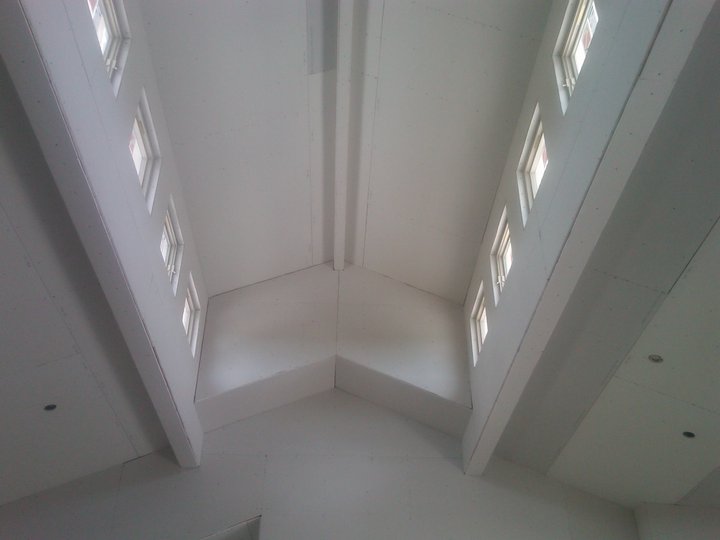 The clerestory not only adds the outdoors in, but it is a great architectural element for the elevation of the home, as below in our Fredericksburg plan. 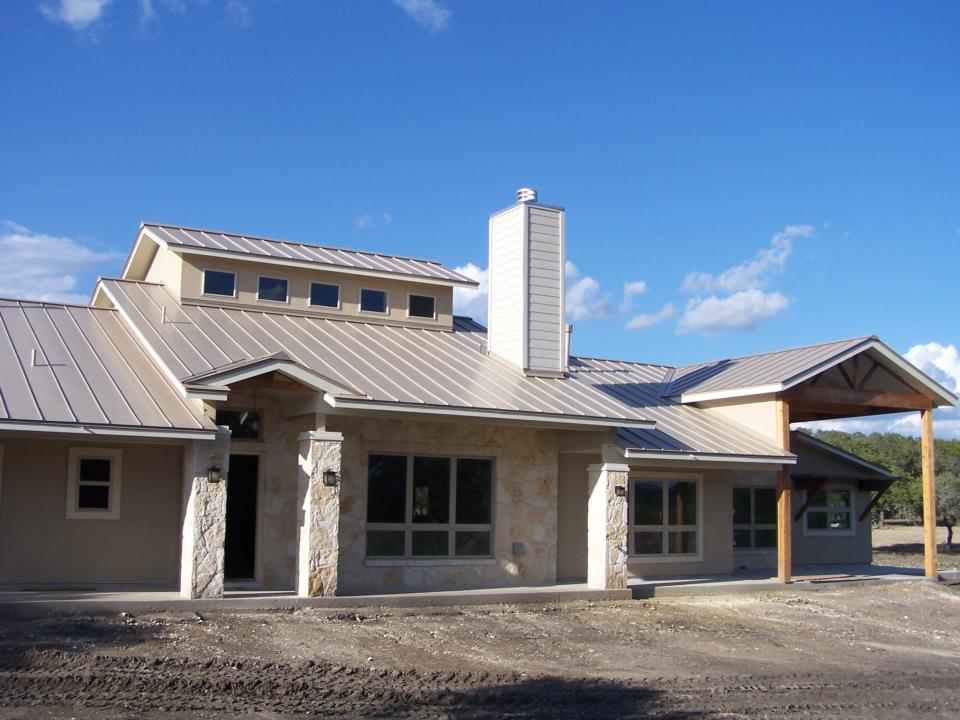 A specialty ceiling greatly enhances the look and feel of a home. Specialty ceilings can be used in almost any room, including hallways, great rooms, bedrooms, bathrooms and more. For information about designing and building custom homes in Texas, please contact Kurk Homes today.

Spotlight on Home Design: The 8 Most Requested Architectural Styles